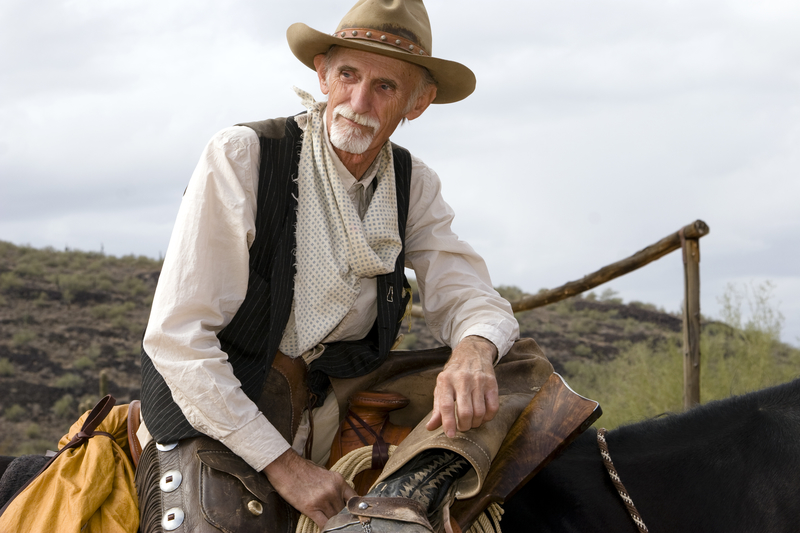 Life might have been tough for the cowboy but they knew what it took to do their job and live in relative contentment while facing the wilds of the rough country! Check out some of the items they carried with them:

1. A good knife
The first thing that any cowboy had was a good knife. They didn’t have hatchets, machetes, wire saws and multi-tools like we carry in our bug-out bags today. Their only tool was a knife. So it was important to have a good one. This would usually be a mid-sized sheath knife, which was used for everything from cutting wood to skinning game.

2. Guns and ammo
Few cowboys roamed the West without a firearm. It might be a pistol, but in most cases it was a rifle. The pistol was more convenient, but the rifle was better for hunting game or fighting Indians.
Many of the cowboys had been soldiers in the Civil War. When they were discharged, they were allowed to take their guns with them. This meant that most had long guns, even if they didn’t have a pistol.

3. Fire-starting
A tinder box was an essential piece of every cowboy’s kit. In it, he would store bits of tinder that he gathered along the trail, always ensuring that he had some with him. He’d also keep a piece of flint in it, often sewn into a leather cover, thus improving his grip on it. If he had matches, they’d be in the tinder box, as well.
4. Canteen of water
The canteen was an essential piece of equipment, especially in terrain where water was scarce. The typical canteen was about 2-1/2 quarts. It would be covered with layers of scrap fabric, usually hand-sewn by the owner. By soaking that fabric in water, when he filled his canteen, the cowboy could keep his water cool.

5. Cookware
A cowboy’s cook set was pretty minimal, but he usually had one. This would consist of a small pot, a coffee pot, a tin plate and a cup.
6. Food
A cowboy never left the bunkhouse without taking some food with him. He never knew what the day would bring or even whether he’d make it back to the bunkhouse that night. So, he kept a little bit of food in his saddlebags at all time. This could include:
Bacon — a favorite staple in the West.
Biscuits or hard tack.
Coffee & sugar.
Dried fruit (if they could get it).

It was common for cowboys to hunt their meat in order to avoid eating the cattle they were raising. It’s not that cowboys had anything against beef, but rather that those cattle were worth money.
7. Fishing line & hook
Many cowboys carried some line and a hook, so that they could catch fish when they camped by the water.
8. Piggin strings
Piggin strings are thin strips of leather or rawhide, like leather boot laces. Their main purpose was for tying the feet of the cattle when thrown for branding or castration. However, they became the cowboy’s equivalent of paracord, using it wherever they needed cordage.
9. Rain slicker
Storms could come up suddenly in the West, especially for those who were in the mountains. Those could be dangerous for cowboys, drenching them and causing hypothermia. They’d keep their rain slicker tied behind their saddle, either in a small blanket roll or alone, where it was ready at hand.
10. Blankets
An actual blanket roll was much bigger than what we are used to seeing in the movies. It could be as much as a foot in diameter. That was too big to carry while riding the range. On the trail, the cowboys would leave their blanket rolls in the chuck wagon, retrieving them at night.  No matter what, a cowboy would have a couple of blankets tied behind their saddle.
11. Coat
Just as today, coats were seasonal things. But you’d never find a cowboy leaving the home ranch, without a coat, if there was any chance of it getting cold.
12. Bandana
The bandana was a useful part of any cowboy’s kit. More than anything, it was used as a dust filter over the nose and mouth. But the bandana served many other purposes, as well, including protecting the neck from the sun, being a handy washcloth and serving as an emergency bandage.
13. Tobacco
Even cowboys who didn’t smoke tended to carry tobacco. Tobacco was the ultimate trade good. Offering someone a smoke was often the start of many a conversation, especially out on the trail.
14. Books

Many cowboys carried books with them. A large number were much more highly educated than you’d expect, having come from the East and being products of eastern schools, even universities.
Reading material was highly prized in the West. Cowboys would carry books along with them, trading them with each other as the opportunity arose.
15. Extra clothes
While they didn’t have an extensive wardrobe, most had a couple of changes of clothes, including one nice suit.

It is surprising to see they carried far more than we might have thought possible. Some did have a wagon with them, along with a guy who cooked their meals while the cowboys were out and about but – for the most part – a cowboy carried their survival items on their body and horse!

If you have not done it yet make a list of the above items, those you may already be stocking, and be proud of our cowboy forebears.

If it was good enough for famous cowboys like Frank “Pistol Pete” Eaton and William “Bill” Pickett, then they are good enough for us! For more on what cowboys carried with them, visit Off The Grid News.