It's crazy to think that an earthquake can cause a potential tsunami, and that's not all. A natural disaster makes many people worry, and for good reason. Not only are they afraid of losing their home, but they're afraid of cause and effect. For example, when the Thomas Fire ripped through Santa Barbara, Montecito, and nearby cities, only a short time later did mudslides happen since the burn spots made the ground soft and unable to soak up that much water during a huge rainstorm.

Below find out what happened all the way in Florida, even though the earthquake took place in Alaska.

Tuesday's (1.23.18) 7.9 magnitude earthquake in the Gulf of Alaska sent vibrations through the earth that caused water to rise and fall in wells in Florida, thousands of miles away.

Sensors near Fort Lauderdale and Madison, near the Georgia border, showed a minor change in water levels after the earthquake, according to the United States Geological Survey (USGS). 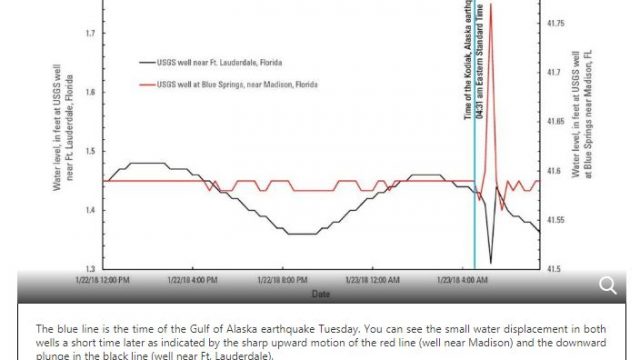 “Water levels in wells respond to the seismic-wave induced expansion and contraction of the aquifer tapped by the well, in turn causing step or oscillatory fluid-pressure changes,” the USGS says.

The changes in groundwater levels are often seen hundreds, or even thousands, of miles away from an earthquake's epicenter.

Occasionally, changes can be extreme.

A 5.2 magnitude northwest Pennsylvania temblor in 1998 rendered dry about 120 wells for local homes for about three months.

The Denali, Alaska, 7.9 magnitude earthquake of 2002 caused a well in Wisconsin to rise 2 feet.

There's not much we can do when a natural disaster hits, but we can be prepared. We can warn friends and family members what else can happen, and how one collapse can lead to another survival event that's related yet different. The truth is the more prepared we are the better off we will be. Have a few bug out location meetups as well as a few shelters in place – there should always be a backup plan for your back up plan!

For more on this natural phenomenon, check out Weather.