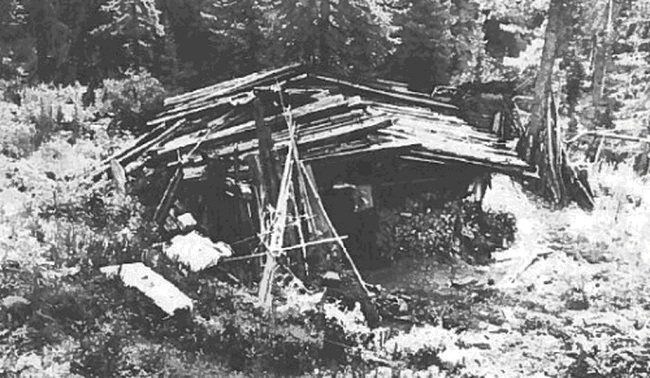 The family in this saga fled to the wilderness to escape religious persecution but really any persecution or society decimating event could land most of us in a similar situation.

About the only question is whether the majority could even eke out an existence on par with this amazing group of people!

Thus it was in the remote south of the forest in the summer of 1978. A helicopter sent to find a safe spot to land a party of geologists was skimming the treeline a hundred or so miles from the Mongolian border. But, peering intently through his windscreen in search of a landing place, the pilot saw something that should not have been there. It was a clearing, 6,000 feet up a mountainside, wedged between the pine and larch and scored with what looked like long, dark furrows.

It was an astounding discovery. The mountain was more than 150 miles from the nearest settlement, in a spot that had never been explored.

The four scientists sent into the district to prospect for iron ore were told about the pilots’ sighting, and it perplexed and worried them. Led by a geologist named Galina Pismenskaya, they “chose a fine day and put gifts in our packs for our prospective friends”—though, just to be sure, she recalled, “I did check the pistol that hung at my side.”

As the intruders scrambled up the mountain, heading for the spot pinpointed by their pilots, they began to come across signs of human activity: a rough path, a staff, a log laid across a stream, and finally a small shed filled with birch-bark containers of cut-up dried potatoes. Then, Pismenskaya said, beside a stream there was a dwelling.

Blackened by time and rain, the hut was piled up on all sides with taiga rubbish—bark, poles, planks. If it hadn’t been for a window the size of my backpack pocket, it would have been hard to believe that people lived there. But they did, no doubt about it…. Our arrival had been noticed, as we could see.

The low door creaked, and the figure of a very old man emerged into the light of day, straight out of a fairy tale. Barefoot. Wearing a patched and repatched shirt made of sacking. He wore trousers of the same material, also in patches, and had an uncombed beard. His hair was disheveled. He looked frightened and was very attentive…. We had to say something, so I began: ‘Greetings, grandfather! We’ve come to visit!’

The old man did not reply immediately…. Finally, we heard a soft, uncertain voice: ‘Well, since you have traveled this far, you might as well come in.’

The sight that greeted the geologists as they entered the cabin was like something from the middle ages. Jerry-built from whatever materials came to hand, the dwelling was not much more than a burrow—”a low, soot-blackened log kennel that was as cold as a cellar,” with a floor consisting of potato peel and pine-nut shells. Looking around in the dim light, the visitors saw that it consisted of a single room. It was cramped, musty and indescribably filthy, propped up by sagging joists—and, astonishingly, home to a family of five:

The silence was suddenly broken by sobs and lamentations. Only then did we see the silhouettes of two women. One was in hysterics, praying: ‘This is for our sins, our sins.’ The other, keeping behind a post… sank slowly to the floor. The light from the little window fell on her wide, terrified eyes, and we realized we had to get out of there as quickly as possible.

Slowly, over several visits, the full story of the family emerged. The old man’s name was Karp Lykov, and he was an Old Believer–a member of a fundamentalist Russian Orthodox sect, worshiping in a style unchanged since the 17th century. Old Believers had been persecuted since the days of Peter the Great, and Lykov talked about it as though it had happened only yesterday; for him, Peter was a personal enemy and “the anti-Christ in human form”—a point he insisted had been amply proved by Tsar’s campaign to modernize Russia by forcibly “chopping off the beards of Christians.”

Things had only got worse for the Lykov family when the atheist Bolsheviks took power. Under the Soviets, isolated Old Believer communities that had fled to Siberia to escape persecution began to retreat ever further from civilization. During the purges of the 1930s, with Christianity itself under assault, a Communist patrol had shot Lykov’s brother on the outskirts of their village while Lykov knelt working beside him. He had responded by scooping up his family and bolting into forest.

The Lykov children knew there were places called cities where humans lived crammed together in tall buildings. Their only reading matter was prayer books and an ancient family Bible. Akulina had used the gospels to teach her children to read and write, using sharpened birch sticks dipped into honeysuckle juice as pen and ink.

But if the family’s isolation was hard to grasp, the unmitigated harshness of their lives was not. Traveling to the Lykov homestead on foot was astonishingly arduous, even with the help of a boat along the Abakan. On his first visit to the Lykovs, Peskov—who would appoint himself the family’s chief chronicler—noted that “we traversed 250 kilometres without seeing a single human dwelling!”

Isolation made survival in the wilderness close to impossible. Dependent solely on their own resources, the Lykovs struggled to replace the few things they had brought into the taiga with them. They fashioned birch-bark galoshes in place of shoes. Clothes were patched and repatched until they fell apart, then replaced with hemp cloth grown from seed.

The Lykovs had carried a crude spinning wheel and, incredibly, the components of a loom into the taiga with them—moving these from place to place as they gradually went further into the wilderness must have required many long and arduous journeys—but they had no technology for replacing metal. A couple of kettles served them well for many years, but when rust finally overcame them, the only replacements they could fashion came from birch bark. Since these could not be placed in a fire, it became far harder to cook.

By the time the Lykovs were discovered, their staple diet was potato patties mixed with ground rye and hemp seeds.

In some respects, Peskov makes clear, the taiga did offer some abundance: “Beside the dwelling ran a clear, cold stream. Stands of larch, spruce, pine and birch yielded all that anyone could take.… Bilberries and raspberries were close to hand, firewood as well, and pine nuts fell right on the roof.”

Yet the Lykovs lived permanently on the edge of famine. It was not until the late 1950s, when Dmitry reached manhood, that they first trapped animals for their meat and skins. Lacking guns and even bows, they could hunt only by digging traps or pursuing prey across the mountains until the animals collapsed from exhaustion. Dmitry built up astonishing endurance, and could hunt barefoot in winter, sometimes returning to the hut after several days, having slept in the open in 40 degrees of frost, a young elk across his shoulders. More often than not, though, there was no meat, and their diet gradually became more monotonous. Wild animals destroyed their crop of carrots, and Agafia recalled the late 1950s as “the hungry years.” “We ate the rowanberry leaf,” she said,

Famine was an ever-present danger in these circumstances, and in 1961 it snowed in June. The hard frost killed everything growing in their garden, and by spring the family had been reduced to eating shoes and bark. Akulina chose to see her children fed, and that year she died of starvation.

Of all the Lykovs, though, the geologists’ favorite was Dmitry, a consummate outdoorsman who knew all of the taiga’s moods. He was the most curious and perhaps the most forward-looking member of the family. It was he who had built the family stove, and all the birch-bark buckets that they used to store food. It was also Dmitry who spent days hand-cutting and hand-planing each log that the Lykovs felled.

That is a pretty amazing story of survival, perseverance, determination – and eking out an existence in the direst of circumstances.

That same scenario could befall many of us if we do not do all we can to be prepared for a draconian survival event; every little bit we can do put off getting to the circumstances of the Lykovs!

To read more about this amazing saga of survival, check out the Smithsonian Magazine.