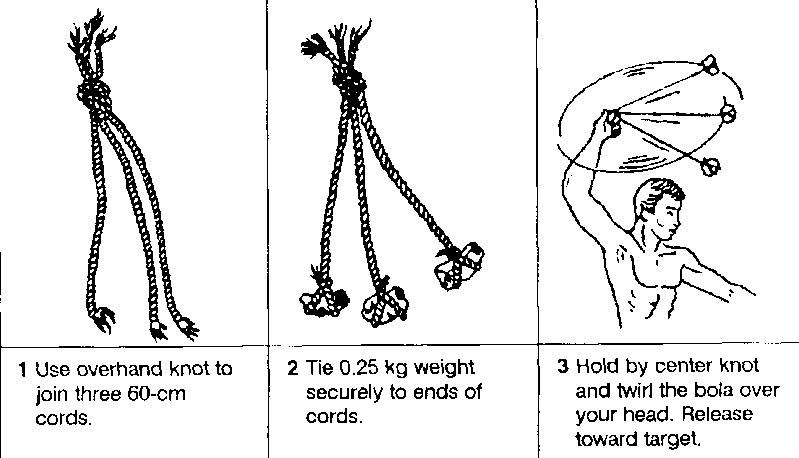 Ideally, no matter what survival situation you encounter, you are prepared and adequately stocked in all facets to allow yourself the ability to survive and thrive.

Unfortunately, life does not always work out that way. However, by learning more about these primitive weapons and how to use them, you just may have a fighting chance.

Today, baseball bats make great clubs — both metal bats and wooden bats. Wooden bats can be modified to have spikes — simply drive long, thin nails through the end of the bat. This bat will now maim any cougar, dangerous dog, or wolf — as well any bad guys that make an attempt on your life.

Spear have been used throughout history to defend man in both battle and also from wildlife. The Spartans used spears in battle and the Maasai use (and still use) spears to hunt African lions in the wilds of Kenya.

Spears have also been used to hunt large game, dangerous predators like African lions and Asian tigers, and even elephants. These are extreme situations though — these are situations that reveal a need for multiple people armed with spears. In other words one person with a spear trying to take down an elephant could be a quick way to get killed. But ten men with ten spears working together could take that elephant down without injury to life or limb. That is going to call for courage and strength though and people who are quick on their feet. Once you strike a dangerous animal you have to be able to quickly move out of the way if it lunges for you, even though it's been wounded.

If you're hunting smaller game like boar and wild pigs in the tropics, just one spear should do the trick. A spear for boar or wild pigs doesn't have to be as big a spear as you'd use on a lion, grizzly bear, elephant, or moose. Not unless you're boar hunting in a region known for giant hogs — and there are a few regions in the world. At 600 pounds, these things can kill. Going after a hog this size with just spears may call for several people working as a team.

There are different options for spears. Some spears can be outfitted with sharp rocks and even spear heads made from steel. When neither sharp rocks or steel spear heads are on hand simply sharpening the wooden tip of a spear base and then fire-hardening it can be enough to turn a harmless piece of wood into a dangerous weapon.

Tip: Your tool shed may have rakes and shovels (old ones) that you can break the metal parts off and simply use the handles as spears, if you ever needed a spear in a time of collapse.

A large knife used solely for self-defense and fighting, for stabbing and thrusting motions. This is a weapon for up close and very dangerous and bloody fighting. It's also a weapon of last resort when attacked by a large dangerous animal — if you're a bold fighter you can stab a dagger into the side of an animal that has you pinned; numerous fast vicious stabs may be enough to make it run or even kill it. As you're being attacked keep stabbing — don't go into shock. Fight until the animal let's up and backs off.

A blowgun is a small (sometimes larger) tube made from bamboo or — in the modern age — a hollow pen or small PVC pipe or even a thick straw. It's loaded with a dart and then the tube blown into with a quick puff of air — the dart is shot from the tube, striking the target.

Reports on blowguns reveal that strong respiratory muscles result in a stronger puff of air, which means greater speed and distance, and ultimately accuracy. How do you build up respiratory strength? Days and weeks of regular practiced blowgun use.

Like any primitive weapon (or modern day weapon), regular training and practice can help build a person's skill, strength, and eye-hand coordination — all work together to maximize a primitive weapon's effectiveness in combat. But when it comes to blowgun use, after all the research is in the blowgun doesn't appear to be an effective weapon in combat — but it can be effective for hunting.

Blowguns have been used to hunt small game (Cherokee Indians in North America used river cane to hunt rabbits and other small animals); they can also be used with tranquilizer darts to capture wildlife or stun caged dangerous animals for short periods of time.

Blowgun darts are small, light weight arrows with a feathered end (fletch), which aids in the dart staying on course once shot.

Proven an effective weapon for both hunting and combat, the bow and arrow have been used by hunters and soldiers alike to cause the death or serious injury of countless people and animals across history. Bows have been built by natural materials by indigenous tribes throughout the world; today many bows (compound bows) are manufactured, using pulley strength and thin cable to create a weapon that is powerful, strong, and accurate. It must be used properly though — the act of “dry firing” a compound bow just once can break mechanical parts, requiring immediate repair. It can take many months of practice to acquire good aim with a bow and arrow. A crossbow on the other hand can be learned in just days. While a person can quickly become a good shot with a crossbow, a regular bow can be re-loaded and shot faster — making the bow a better choice for combat. In hunting however, a person with limited experience can take down large game with a crossbow. Hunting doesn't call for a quick re-load time — it calls for one shot, on target.

Resembling a modern day hatchet, a tomahawk (short throwing axe) was a weapon made famous by Native American tribes that has even been used by select Special Forces soldiers as a secondary weapon in conflicts like the Vietnam War, as reported by authors on the subject.

Tomahawks once were simply a club with a sharp rock or antler as the “axe” end, but after colonialists were rooted in America and trading with Native Americans tomahawks then took on iron edges, creating weapons that look a lot like hatchets.

Tomahawks are typically lighter than a wood-cutting hatchet and make a very dangerous weapon, especially when thrown. As a secondary weapon it can be the first weapon brought into battle and before your adversary closes the distance (between you and him) the tomahawk can be thrown — it if hits the head, torso, or even just a limb this fight can be over before it's even started. Keep in mind — it takes a lot of skill to throw a tomahawk — which calls practice. Don't count on a tomahawk saving you in a life or death fight unless you've got throwing strength, aim and timing down.

I have to say … award for most creative primitive weapons goes to the Filipinos. The Philippines have been colonized by more powerful nations with more advanced weapons a number of times in recent history and yet a number of Filipinos fought back with about as primitive a weapon as they come — using farm tools when they didn't have weapons.

A few centuries in earlier history the Philippines were colonized by the Spaniards who immediately banned any Filipinos from possessing weapons. The Spaniards believed this would be the only way to keep them in line. So what did the Filipinos do? They turned to farm tools — tools used for a variety of tasks became weapons; they began to train with these weapons, relying on the martial art known as “Eskrima” to be their method of fighting. This art includes using tools for both self defense and to attack. Ordinary farm tools became dangerous weapons — dangerous when combined with hand to hand fighting techniques and techniques for disarming an opponent, as taught in Eskrima. What's notable about Eskrima is that it calls for two weapons, one in each hand; one weapon for self-defense and the other for offensive attacks. Three weapons were born from Filipino tools that became popular around the world: the bolo, the balisword, and buntot pagi.

Primitive weapons obviously are not the weapon of choice in a survival situation, but if your traditional weaponry is rendered useless, you have to have an alternative in order to survive.

Knowing how to make or use a spear or tomahawk or even a primitive bow and arrow is a vital skill that maybe end being your lifesaver.