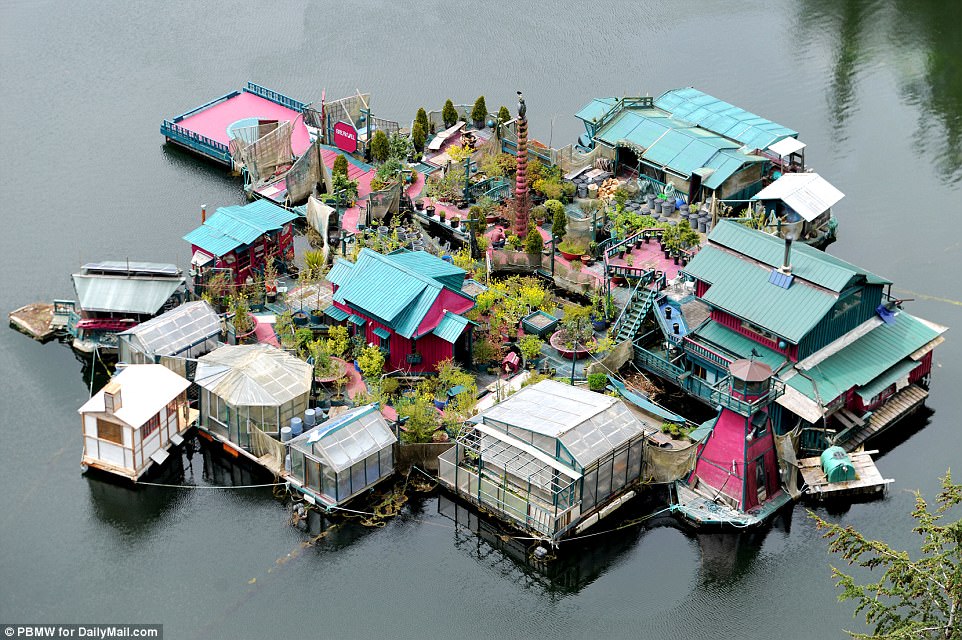 Apart from the incredible space they have created, one major lesson to take away from this article is that their mantra has been “learn as you go.”

That is a vital characteristic of all successful survivalists – and often the difference between making it through and barely eking out an existence.

Catherine King flits through her garden every day with the grace and ease of a professional dancer, the 61-year-old’s flowing, wavy gray hair cascading down her back as she checks on the greens and vegetables under an idyllic sky off Vancouver Island. It’s from these gardens that she sources daily meals to share with her husband, Wayne Adams, but these are no ordinary crops organized neatly in the earth.

They’re not even on land; instead, Catherine maneuvers her petite frame between plant containers on a floating labyrinth that she and Wayne have constructed over 25 years, tending to an art installation compound that brings bright splashes of pink and color to the dark green, brooding hues of the Pacific Northwest.

They aptly named their multi-faceted residence and work space Freedom Cove – where they make candles and art and grow food and create, all on a water-top compound of buildings, gardens and even a dance floor. They’ve never had cell phones and only sporadically make trips to land, though many a curious land-dweller comes to visit them in their open-door policy abode.

Wayne fishes for food in nearby waters – and there's even a hold in the floor of his home for easy access though he never fishes there seriously, preferring instead not to disturb the schools of fish that have made their home under their property – while Catherine is a vegetarian and sources her meals from Freedom Cove's gardens

Wayne says: ‘I started building a little studio for us, thought maybe we could be wealthy artists living in [nearby] Tofino and have a little studio to be inspired and do our work, but as time went on – economics – Tofino went up in price, and we either had to move to another town or move out.

‘So I was very lucky to have a person like Catherine willing to want to come out and really make a go of it. So the two of us decided to start there and put everything we had into it and live away – and initially had a little studio for two to do our carving and our art; that was the beginning.’

‘Both Wayne and I, once we decided this is what we wanted to do, we just did it,’ says Catherine. ‘We really didn’t think about the hardships; we just did it.

‘And you go through what I call a deceleration process, when you make the move out – and what I mean by that is go through a certain type of withdrawal from the things that you have at your access when you live even in a small town – being able to go to the corner store, being able to have things instantly. So it took a few months to go through that.’

Wayne adds: ‘It’s such a subtle thing; after 25 years of floating on liquid, your body starts to feel something and you’re floating and it just changes.’

Learning from experience over the years, Wayne implemented a spiderweb formation with ropes to shore and added weights to slow the impact of the wind during storms and to allow the system to move as one piece

‘Over 25 years, things have come and gone, and we’ve built many things more than once,’ Wayne says.

‘There’s always maintenance and repair and storms, so our place transforms every year,’ Catherine says. ‘It is a big installation art piece that looks different from year to year due to the necessity of repair from storms, and from us being artists wanting to make it look aesthetic, as well.’

And storms are quite the experience on their floating abode.

‘What chases most people out of here, as far as making a home, is the storms and the wind and the rain,’ says Wayne.

But he and Catherine remain steadfast, tending to their beloved Freedom Cove.

‘You have to stay and take care of it; if you abandon it, then things can get into trouble,’ Catherine says.

Much of their daily life is maintenance. They wake with the light and Wayne gets the power up and running; they use a mixture of solar and generators. They have internet access via satellite which was brought into the region to aid tourism and big resorts (even though, Wayne says, many residents objected.)

You have to remember you’re in the wild, so dirt and dust gets in here really easily. If I didn’t do things daily, it would look crazy in here – especially with pulling the firewood in and out and with me working in a garden, where I have dirt outside, and so on.’

Wayne and Catherine eat simple meals from food they grow or gather themselves, though sometimes they indulge in treats from town such as popcorn, chips and candy; he jokes that a chocolate bar is ‘the most valuable thing in the wilderness'

Wayne says: ‘The thing about living here, for me, is my job every day is to get up in the morning; it’s like floating a small farm. I have chores to do. I have managed to bring pipes to the island; I have a gravity-fed water system, so we have no pumps. Our water source is 50 feet above us … so it’s an ideal location and the opportunity to have a garden and be more self-sufficient is because we have water.

‘That’s one of the most important things, fresh water, that’s allowed the garden to evolve to where Catherine now, after all these years, can live off it all year round. It’s warm enough for us to grow a garden all year round here. There’ sonly two places in Canada you can do it: that’s here in the temperate rainforest on the west coast and the Gulf Islands.

‘We’ve grown and learned how to be prosperous in the garden from experience, and Catherine’s done all that work.’

They have light, basic foods for their meals, utilizing greens and vegetables from the garden. Catherine is a vegetarian, while Wayne goes fishing or, more rarely, has a bit of meat obtained from a trip to land. The treats they look forward to from town are popcorn, chips and candy.

‘The most valuable thing in the wilderness is a chocolate bar,’ Wayne laughs.

They have one wood-burning stove that is their only heat source, and they use a tank for waste which Wayne tows out and empties every six months. But when they’re not doing maintenance, they’re creating art; they’re avid carvers, in addition to making candles and working with feathers. They’ll take the boat over to visit their 45-year-old son, Shane, who has also chosen to live in a floating home, and they have their share of tourists who turn up. They are proudly shown around Freedom Cove – where Catherine and Wayne have an open-door policy and even gift tourists candles upon departure.

And Wayne and Catherine say they don’t worry about being far removed from more established institutions on land like shopping malls and hospitals.

‘To be immersed in the wild as a wildlife artist was the best inspiration for my work, and it shows when you live out here,’ says Wayne. ‘Nature is immersed in you and what you do.’

Wayne and Catherine have created a flotilla that is a homesteader's or survivalist's dream.

It was only possible, however, through patience, having a vision and perseverance.

That should be a lesson to all of us who strive for a simpler, more self-sustaining existence – you do not have to do it all at once in creating your “masterpiece.”

To learn more about Wayne and Catherine's “Eden,” check out The Daily Mail.

Featured Image via The Daily Mail