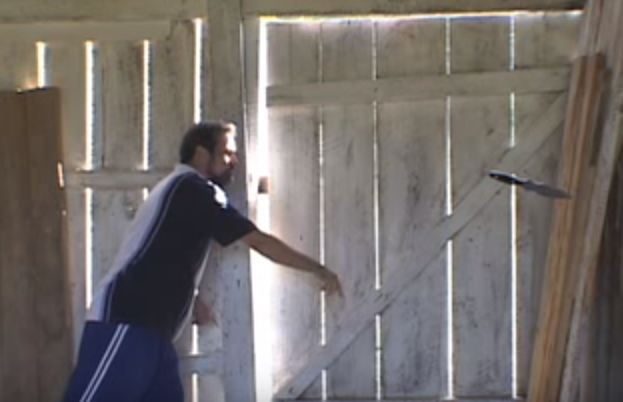 If You Have A Knife And An Area For Target Practice, We Highly Recommend Watching The Video Below. This Cool Technique Of Throwing A Knife Without Spin Is NOT Difficult To Master And Once You Have It Down You'll Be All Set.

If you've ever seen a movie or even been to a renaissance fair, chances are you've seen someone at some point throwing knives.

Usually, they spin a lot through the air and always somehow magically land on target, digging the point in deep to whatever they were throwing at.

Of course, seeing this, at some point you've probably thought “that's so friggin' awesome, I want to try it.” Then you do try it and fail time and time again because the handle keeps hitting the target. So you move back or closer, but the handle still hits. No matter what you do, you can't get it to stick every time.

Sure, knife throwing really isn't a skill that's very useful, especially because by the time you've lined up your shot, counted your paces, and actually thrown the knife, you could have shot an entire magazine at the target, reloaded, and unloaded another magazine.

But knife throwing is fun, especially when you know how to do it. A big stumbling block people encounter while throwing a knife is that the knife spins through the air too much. But what if you could throw it with no spin at all?

Check out this tried and true method of no-spin knife throwing technique on the next page.