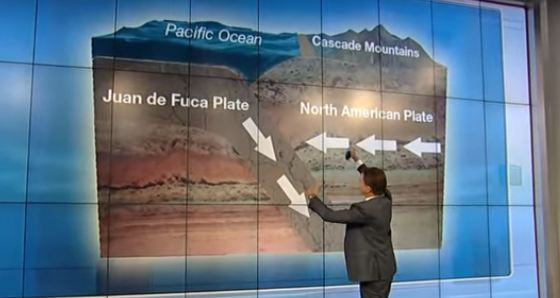 Scientists want you to know this earthquake will happen, but we don't know when. Here is a brief from the initial report from the New Yorker:

The first sign that the Cascadia earthquake has begun will be a compressional wave, radiating outward from the fault line. Compressional waves are fast-moving, high-frequency waves, audible to dogs and certain other animals but experienced by humans only as a sudden jolt. They are not very harmful, but they are potentially very useful, since they travel fast enough to be detected by sensors thirty to ninety seconds ahead of other seismic waves. That is enough time for earthquake early-warning systems, such as those in use throughout Japan, to automatically perform a variety of lifesaving functions: shutting down railways and power plants, opening elevators and firehouse doors, alerting hospitals to halt surgeries, and triggering alarms so that the general public can take cover. The Pacific Northwest has no early-warning system. When the Cascadia earthquake begins, there will be, instead, a cacophony of barking dogs and a long, suspended, what-was-that moment before the surface waves arrive. Surface waves are slower, lower-frequency waves that move the ground both up and down and side to side: the shaking, starting in earnest.

Soon after that shaking begins, the electrical grid will fail, likely everywhere west of the Cascades and possibly well beyond. If it happens at night, the ensuing catastrophe will unfold in darkness. In theory, those who are at home when it hits should be safest; it is easy and relatively inexpensive to seismically safeguard a private dwelling. But, lulled into nonchalance by their seemingly benign environment, most people in the Pacific Northwest have not done so. That nonchalance will shatter instantly. So will everything made of glass. Anything indoors and unsecured will lurch across the floor or come crashing down: bookshelves, lamps, computers, cannisters of flour in the pantry. Refrigerators will walk out of kitchens, unplugging themselves and toppling over. Water heaters will fall and smash interior gas lines. Houses that are not bolted to their foundations will slide off—or, rather, they will stay put, obeying inertia, while the foundations, together with the rest of the Northwest, jolt westward. Unmoored on the undulating ground, the homes will begin to collapse.

Across the region, other, larger structures will also start to fail. Until 1974, the state of Oregon had no seismic code, and few places in the Pacific Northwest had one appropriate to a magnitude-9.0 earthquake until 1994. The vast majority of buildings in the region were constructed before then. Ian Madin, who directs the Oregon Department of Geology and Mineral Industries (DOGAMI), estimates that seventy-five per cent of all structures in the state are not designed to withstand a major Cascadia quake. FEMA calculates that, across the region, something on the order of a million buildings—more than three thousand of them schools—will collapse or be compromised in the earthquake. So will half of all highway bridges, fifteen of the seventeen bridges spanning Portland’s two rivers, and two-thirds of railways and airports; also, one-third of all fire stations, half of all police stations, and two-thirds of all hospitals.

We don't know when or where the earthquake will occur, nor do we know what impact it will have on us. The best thing we can do is learn about potential disasters and create an emergency plan just in case. To learn more about this potential disaster visit New Yorker.