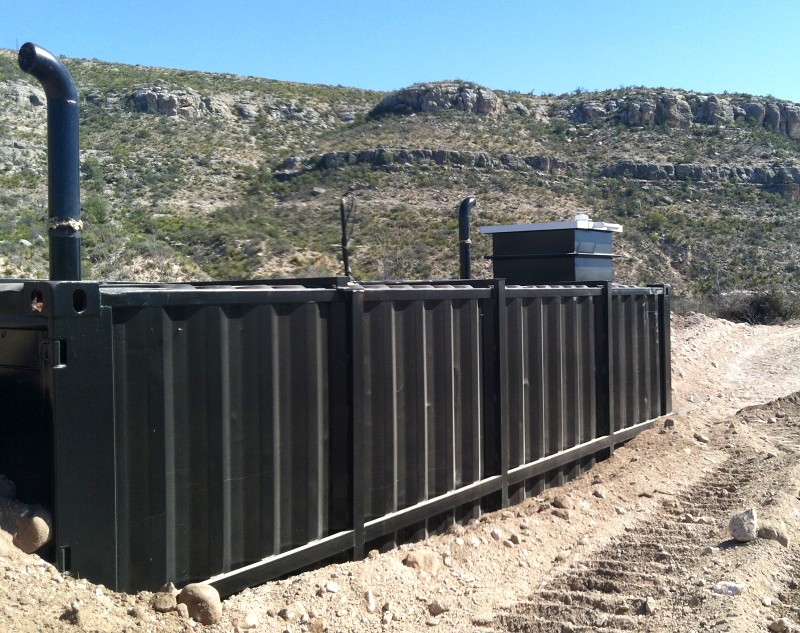 Shipping containers were designed to ship stuff while protecting the contents inside from weather, loss and theft; that is basically all they are supposed to do.

When you convert them into something they are not designed to do, you run the risk that they will actually pose a danger to you and your family; here is why.

Shipping container bunkers may not be the best idea

Shipping containers were built to be stacked. They’re called Intermodal Freight Containers because they can be moved on trains, boats, helicopters, whatever. They are meant to be large portable closets. They were not to be buried or cut into, and certainly weren’t designed to be used as underground bunkers. Once you do that, you start changing their effectiveness. They are not built for lateral pressure and not designed for long-term wetness or acidic/caustic soil.

Think about an egg. If you push down from the top of an egg, it’ll hold up to a lot more pressure than you’d think. Press it on the sides though and it crushes before you even start pushing. Same thing for a beer can. You can stand on one with no problem but then push your finger into one of the sides and the whole thing crushes. That’s because the force pushes down on itself, which is why shipping containers can hold a lot of weight if they’re stacked. These containers are designed to hold a LOT of weight as long as it’s held in the right spots, but anywhere else and you might as well just bury an enclosed car trailer. Take a look at what happened with this container that ended up being sent to auction.

What are you trying to accomplish? Sure, you can get a shipping container for a few thousand dollars. Those few thousand dollars buy you a very small room. A room that I’ve lived in for many, many, many months overseas on different deployments. They’re called Containerized Living Units (CLU’s) or Containerized Housing Units (CHU’s). I used them just to sleep in, along with anywhere from one to three roommates and I gotta tell you, it’s not fun. I couldn’t imagine being stuck in one of them with other people for months at a time.

That’s not even counting the actual logistics of not leaving the container, including human waste, trash, emotional pressure and the actual tactics involved. If you’ve ever been in combat in an urban environment, you know just how bad of a decision it is to hole up in a room with only one entrance. One entrance means one exit. If they control the entrance, they control the exit, and they have a lot more room and supplies outside than you could have in a bunker.

Not to mention the fact that shipping containers are prone to have toxic paint and chemicals in the wood, including fumigation sprays that will likely require you to replace all the wood and strip all the paint to be safe.

Enough of that for now though because there are ways to plan around these problems but I wanted to mention them because people who are drawn to burying shipping container bunkers are the same idiots who’ll not consider what I’ve mentioned already, let alone the tactical disadvantage of being buried in a box a few feet below the surface with limited air supply and exits.

The plain and simple truth is that a shipping container is designed to be stacked and have pretty much zero horizontal external pressure. Burying it will add a LOT of side pressure, especially if you’re in a rain-prone environment or have certain soils. They’re just not built for that. Might as well just build a frame and fill it with cement in the walls for a lot cheaper.

As long as it’s sealed, you can make it useable if you spend some time reinforcing the walls, depending on the soil and rainfall in the area. Just make sure that you don’t bury a 9-ish foot container under 6 feet of earth in an area that has a water table 12 feet under the ground. If you want to see some common specifications of shipping containers, check out this wikipedia article.

Basically, a shipping container is pretty good for above-ground fortification as long as you fix any chemical problem. You can decide to bury one (or more) but to do it properly (not even counting the tactics and other considerations), you’ll have to spend a lot more money to make it right than just buying and delivering the containers.

For all of the above reasons, including the reality that encasing yourself and your family in a dirt cavity very closely resembles a tomb, using a shipping container as an underground bunker falls under the category of “penny-wise, pound-foolish” unless you mitigate the very significant issues with them.

Doing that, however, will cost you, so the smarter idea is to look at an established underground bunker contractor if that is what you decide is the best way to prepare for a survival situation.

To learn more about shipping containers and underground bunkers, check out Graywolf Survival.