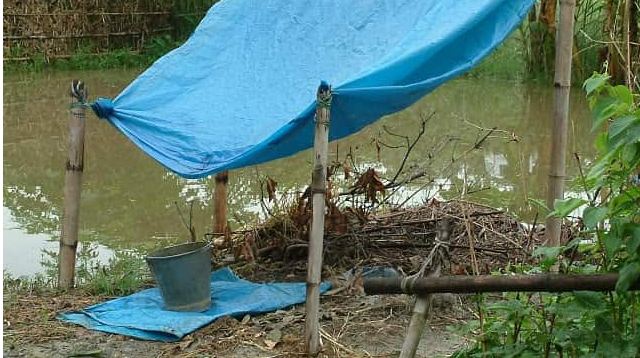 Tarps used to be considered a staple in camping or survival, but as equipment for both has grown more sophisticated, the common tarp has been left by the wayside.

It still has the same potential that it did; here are just a few suggestions.

With just a plastic tarp and a bit of paracord, you can make a great survival shelter to protect you against the elements. One of the easiest emergency shelter to make is the Tarp Tent. You just tie the paracord between two trees and drape the tarp over it and secure the ends to create a tent.

A solar still is a way of both collecting and distilling water. It is particularly great in situations where no water is available, such as dessert survival. It works best if you have a clear plastic tarp or plastic sheeting. A clear rain poncho could even work in a pinch.

To make a solar sill, you first must dig a hole. It should be about 3 feet deep and 3 feet wide, which means that you will have to do a lot of work! You could make a smaller solar still too, but then you won’t catch as much water.

You can put cacti, leaves, grass, or even urine into the pit you dug. Put a bucket or other water collection vessel into the middle of the pit. Then cover the pit with your plastic tarp. Secure the tarp so it won’t fall into the pit. You will need to put a rock or other heavy object into the center of the tarp so it angles downwards.

As the sun shines through the plastic tarp, it will cause moisture from the ground and plant matter inside the pit to evaporate in a greenhouse-like setting. The vapor will touch the plastic tarp. As it does, the vapor will cool and condense on the inner surface of the tarp. Since the plastic tarp is angled downwards the drops of condensation will drip into the bucket below.

This method isn’t fool-proof for cleaning contaminated water since pollutants can get into the vapor as well, but it is fairly effective. Solar sills are also used for filtering salt water when stranded at sea.

Instead, put the plastic tarp between two blankets. Then wrap yourself in the blankets. This sandwich will help you retain body heat.

Lay out your tarp and write HELP on it really big to get noticed by airplanes. Or climb a tree and fly the tarp like a flag to signal for help.

Your basic survival kit should have at least a smaller sized tarp but ideally, you should have three or four different types of tarps for survival utilization.

This is because the uses for tarps are so many and you never know when it might be your only option to get what you need!

To read up on other uses for the common, overlooked tarp, check out Primal Survival!